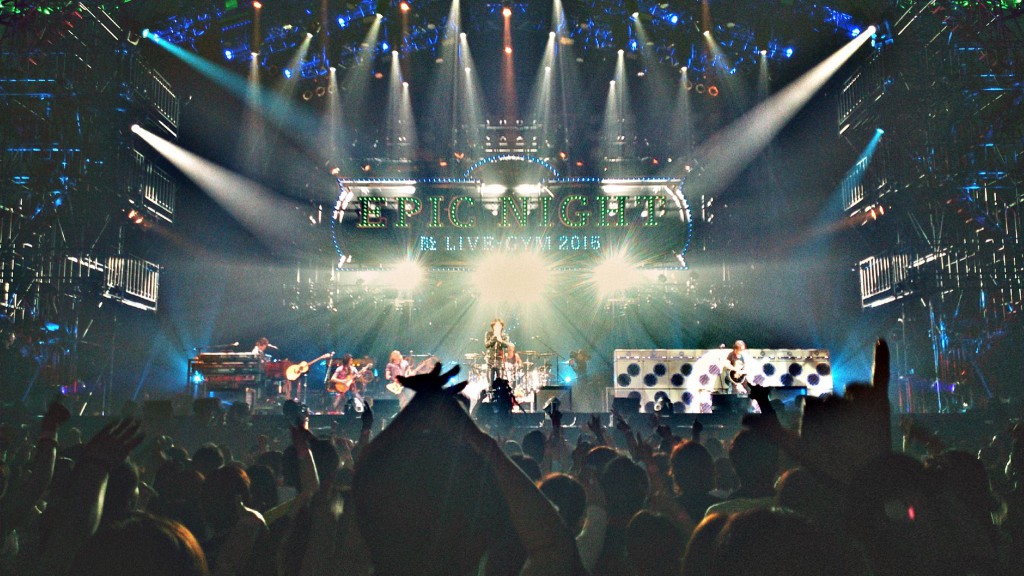 B’z have just wrapped up the hall & arena leg of their latest tour. The dome portion begins June 13th!

After twenty-seven shows over two months, B’z have just wrapped up the hall and arena leg of their latest tour, B’z LIVE-GYM 2015 -EPIC NIGHT-, with a two-night showing at Okinawa Convention Center. We published a full live report on the April 2nd show in Yokohama here that you may wish to read to get more details on how the shows have been playing out.

The tour saw a great many songs from their latest album EPIC DAY performed, as well as the revival of several older classics. For a full rundown on every song played—including how frequently each made an appearance—and some speculation on what the dome tour could bring, continue reading below.

The setlist for the hall portion of the tour began with the band’s latest single, “Uchouten”. The move was a surprising one—not due to the quality of the song, which has been very well received by fans—because the song begins on a mellower note than most B’z openers. It bears noting that then-new promotional track “Q&A” from B’z The Best XXV 1999-2012 served as the opener to Pleasure 2013 -ENDLESS SUMMER-‘s hall tour as well before being replaced by new song “Endless Summer” for the dome portion. Taking past precedent into account, we expect a high-energy number from EPIC DAY such as “Las Vegas” or “EPIC DAY” to open the dome portion of the tour and for “Uchouten” to receive a special showing later in the setlist. 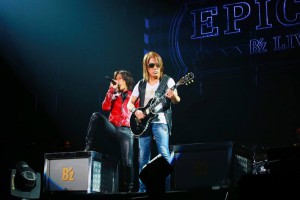 The shows then continued with a string of album songs: “NO EXCUSE”, “Amari ni mo”, “Exit To The Sun”, and capping things off with album favorite “Black Coffee”. On its heels were two classic songs, which were alternated between the pairing of “Don’t Leave Me” and “BLOWIN'” on some dates and “TIME” and “love me, I love you” on others. On all of the dates of the tour, the following four songs—recent fan favorite “HEAT”, new album songs “Classmate” and “Man Of The Match”, and the return of “Atsuki Kodou no Hate” after a thirteen year absence—remained the same.

The band’s most-performed song since its release, “ultra soul”, made an appearance in the next slot and was paired with 1997 album song “Swimmer yo!!” as a follow-up (as had been the case in the 2001 LIVE-GYM “ELEVEN”). Tak then took center stage to perform his customary solo, where he performed a rendition of solo composition “GO FURTHER” before transitioning into “BURN -Fumetsu no Face-” as it made its first appearance since 2009.

The main portion of the setlist ended with the hard rock pairing of album songs “Las Vegas” and “EPIC DAY”. For the encore, the band began with one of the band’s biggest and most-recognized singles of the modern era, “Ichibu to Zenbu”. The finale to all shows would be one of two of the band’s highest-energy numbers: “Ai no Bakudan” and “girigiri chop”. The latter was played on only three dates during the initial rotation before the former took over for the remainder of the tour.

With the impending release of the band’s 52nd single “RED“, many fans hope and expect the song will be added to the setlist during the dome portion—possibly as part of the encore. The song, from the midpoint of this leg of the tour, has been serving as part of the Ending SE. A previously unheard and as-yet unreleased rock song was also used as part of the Ending SE until near the end of the hall tour, as was “Hitori Janai Kara -Theme Of LIVE-GYM-” for early dates.