Just weeks ahead of the band unleashing their 51st single and first in over two years, B’z made an appearance as one of the headlining artists for this year’s four-hour 「Music Station Super Live」 program just this past Friday. The band gave a brief interview and performed their newest work, 「Uchouten」, which will officially go on sale January 14th, 2015. We’ve taken the liberty of subtitling their full appearance, along with translating the new song in full–already! You can view the full video on Dailymotion as shown above. Additionally, you may view the full lyrics to the new single here on the B’z Wiki.

More TV appearance news are out! The band has announced that they will be performing on Fuji TV’s「Shinnen Dakara Kantetsu De Ongaku Night」scheduled to air January 3rd, 2015 from 12:50AM to 4:50AM. B’z is listed only as a “Live Guest” and not as a “Live & Talk Guest”. Therefore, there will probably be no interview of sorts.

The first TV commercial for B’z upcoming new single「Uchouten」aired today during Detective Conan. The video itself might be part of the music video, which we expect will be posted very soon! 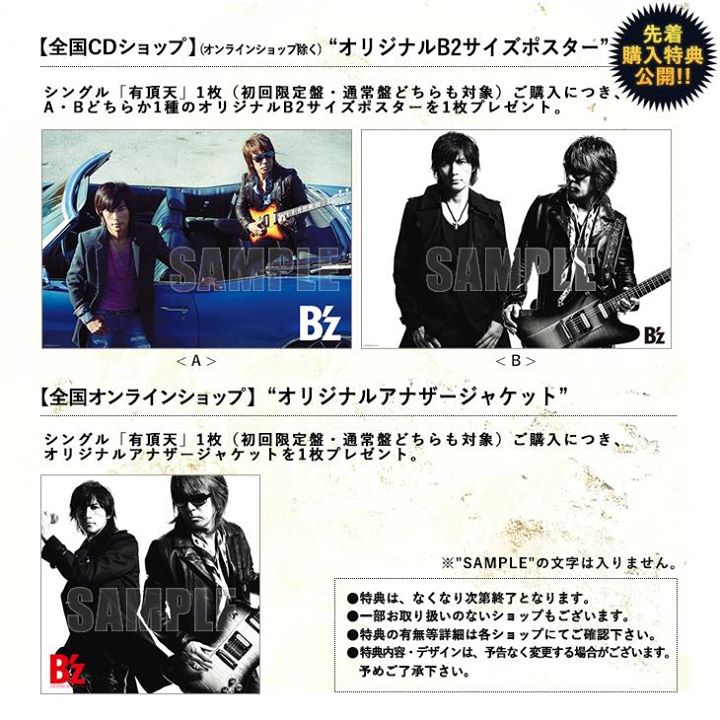 In addition to the already planned performances on「Music Station Super Live 2014」and「LIVE MONSTER」, the band has announced that they are going to perform on the CDTV new year countdown special. The「CDTV Special! New Year Premium Live 2014 -> 2015」will air on December 31st, 2014 11:45 PM on TBS. The official fanclub B’z Party is also looking for fanclub members to join the audience for this show.

It is really interesting to see that B’z is back to making television appearances! Perhaps we can expect more in the future?

Word just got out that B’z is going to perform at the Music Station Super Live 2014 on December 26th! We don’t know which song(s) they are going to perform, but perhaps we are going to see the first televised performance of their new single「Uchouten」?! We will provide you with details once the show has aired!