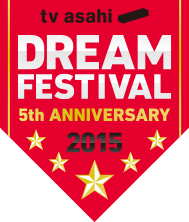 The band has announced that it will be performing at this year’s TV Asahi Dream Festival, which celebrates its 5th anniversary this year. Their previous, and first, performance at the festival dates back to 2011. This year’s rendition of the festival is held from November 21-23 at the Yoyogi National Gymnasium in Tokyo. B’z will perform on the first day on November 21st. Tickets can be obtained through eplus from September 11 for 10,800 Yen per ticket.