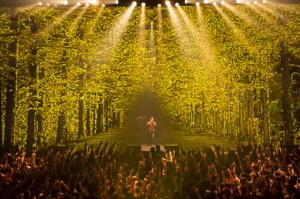 Koshi’s latest release features the full finale to the eponymous tour that took place at the Shinagawa Stellar Ball over the course of ten days. The ~en-ball~ shows employed a special 3D projection technique (seen right) that impressed attendees at each show and is equally impressive on home video.

This week, it was announced that the DVD and Blu-ray editions of Koshi’s upcoming single 「Hane」will feature six performances not found on the initial home video release, as the songs performed took place on dates prior to the finale.