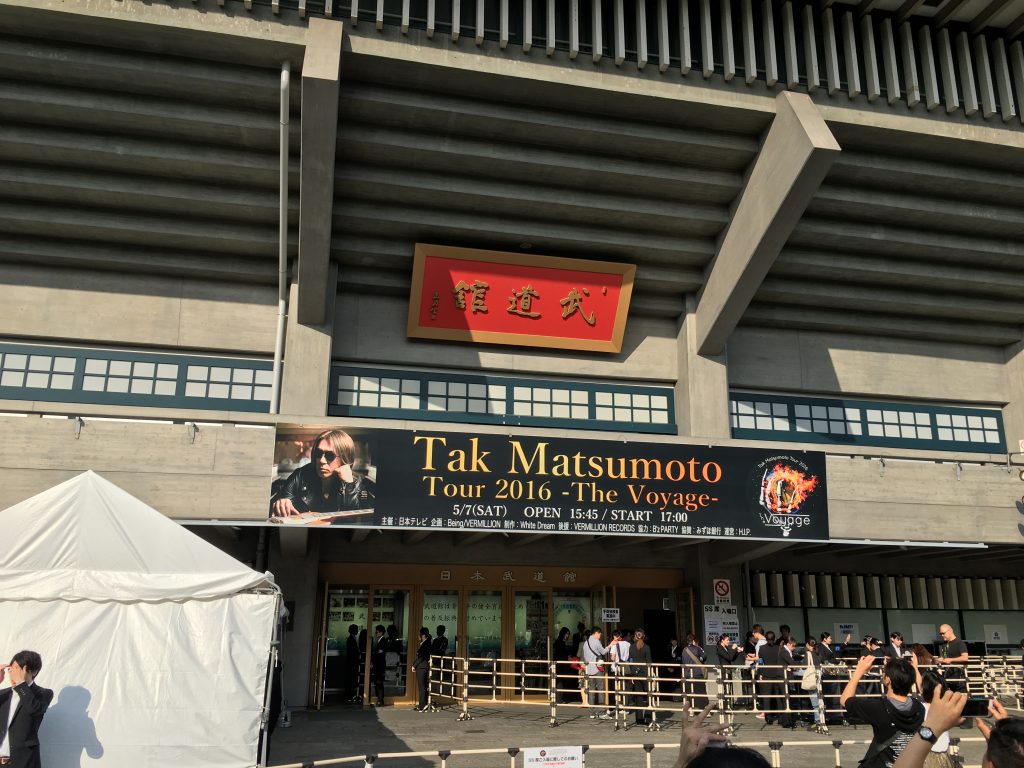 Tak Matsumoto’s latest solo endeavour takes a different turn compared to his last solo album 「New Horizon」 which was inspired by his previous work with Larry Carlton. His new album 「enigma」 is the product of Tak’s self-reflection regarding his career and his musicianship. Even now, it remains a mystery to him if he has become the musician he is supposed to be. An enigma. On this tour, titled 「The Voyage」, Tak Matsumoto takes the audience on a journey through his career, supported by lighting effects and videos.

This is the first time for me to go to one of Tak’s solo shows, and I was very excited to see what kind of performance Tak has got in store for a big venue such as Nippon Budokan! I am used to instrumental guitar performances by the likes of Steve Vai and Joe Satriani. However, not in such a huge venue.

END_OF_DOCUMENT_TOKEN_TO_BE_REPLACED 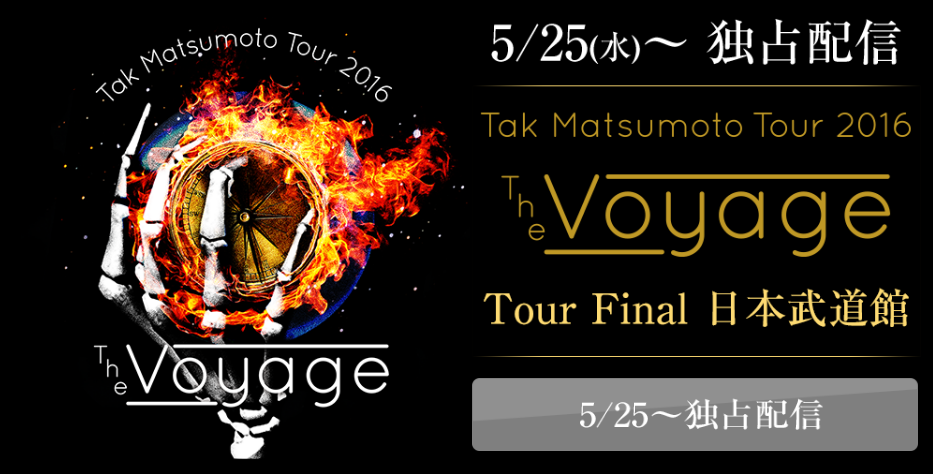 Tak Matsumoto’s tour 「Tak Matsumoto Tour 2016 -The Voyage-」 in support of his latest solo album 「enigma」 wrapped up this month with its tour finale at the Nippon Budokan. The tour finale was broadcasted live on the internet through the NTT DoCoMo owned streaming service dTV. While it wasn’t clear when exactly the show will be available in on-demand format, the service has announced yesterday that the show will be available for on-demand viewing from May 25th to August 24th.

Although the Japanese streaming service offers a 30-day trial, it does not accept foreign credit cards. Therefore, unlike Hulu Japan, it is not possible to sign up for an account.

Tak Matsumoto Tour 2016 -The Voyage- Kicks Off in Nagoya 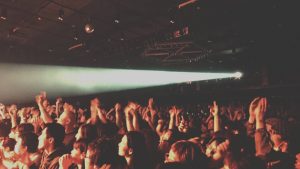 Tak Matsumoto’s most ambitious solo tour to date entitled 「Tak Matsumoto Tour 2016 -The Voyage-」 began today at Nagoya’s Diamond Hall. The five date tour will culminate in a sold-out show at the Nippon Budokan with Tak’s largest solo showing to date on May 7th. Some alterations to the setlist can reasonably be expected to take place; any such revisions will be added to the tour’s B’z Wiki page as it progresses. Additionally, a full live report will be posted once the tour has concluded, so keep an eye out for that.

In the meantime, you may view the current state of the show below, preserved after the break to avoid spoilers for those attending any of the shows.

END_OF_DOCUMENT_TOKEN_TO_BE_REPLACED

To wet your appetite for Tak Matsumoto’s upcoming new solo album, a digest of Tak’s previous solo tour in 2014 has been posted. The show will be available on DVD and Blu-ray that comes with the limited editions of 「enigma」.

Tak Matsumoto’s upcoming solo tour 「Tak Matsumoto Tour 2016 -The Voyage-」 is set to kick off next month with a total of five dates that includes his first arena shows as a solo artist. These will take place at Osaka Jo Hall on April 24th and the Nippon Budokan on May 7th. Today, Tak released a short message teasing what audience members can expect from the show, which we have subtitled for you below:

Additionally, the results of the fan-request polling for the upcoming tour have also been revealed, with just over twenty songs coming in on the rankings. As mentioned in the above video, Tak expects to mix the majority of his as-yet-untitled new album due out this Spring with several of his older solo songs. The songs chosen by fans include several on which Tak provided vocals himself, from 1999’s KNOCKIN’ “T” AROUND. These include single “THE CHANGING” alongside album songs “SAKURA” and “Zero Yori Zero Kara”. Naturally, most of Tak’s best-known solo compositions made the list, including “#1090～Thousand Dreams～“, “Hana“, “Koi Uta“, “GO FURTHER“, and “SACRED FIELD“.

* Denotes a tie with an adjacent song

An update to the official B’z website today brings a promotional teaser video of Tak Matsumoto’s upcoming solo tour「Tak Matsumoto Tour 2016 -The Voyage-」which will see him playing large venues such as Osaka Jo Hall and Nippon Budokan for the first time as a solo artist. The nationwide tour is to be held at five venues beginning in mid April and ending with a finale on May 7th.

Tak will be joined on the tour by drummer Jason Sutter, who has previously toured with Foreigner, Chris Cornell, and Smash Mouth. Colleague and friend Masayoshi Yamashita of fellow Japanese rock act LOUDNESS will be appearing on bass, while frequent B’z backing guitarist Yoshinobu Ohga and keyboardist Akira Onozuka round out the remaining support members.