In a surprise announcement, B’z have revealed that their latest tour B’z LIVE-GYM 2019 -Whole Lotta NEW LOVE- is going to be released on home video in 2020. Details regarding the contents of the release are yet to be unveiled. The same goes for the release date.

For the moment, you can enjoy a teaser of the show featuring footage of “Tsuwamono Hashiru”.

The 2019 LIVE-GYM “Whole Lotta NEW LOVE” has kicked off at Kagoshima Arena with the first of a full summer of shows. It was preceded by B’z SHOWCASE 2019 –Makaitenshow– earlier in the week with the same setlist. It’s unknown how many songs will alternate through the tour but we will keep you updated!

All of the tour’s goods have been revealed as well, including T-shirts and all tour-specific specialty items here.

The full setlist is posted below along with tallies on when each song was last played live.

The twenty-first B’z album NEW LOVE has debuted at the top of the Oricon charts with 207,000 physical copies. Though not led by a single (a first for them) and with the continued decline of physical sales for non-idol groups, the album outsold 2017’s DINOSAUR and almost matched EPIC DAY without television appearances or extensive marketing.

Oricon reports B’z album sales are now at 46,872,000. This extends the record for Most Albums Sold and Most Number-One Albums with their eighteenth consecutive studio album and twenty-ninth top album overall (when factoring in compilations and mini albums).

If you’re on the fence, check out three music videos from the B’z YouTube Channel:

The band has successfully released their 21st album, marking the start of a new era for B’z: New members, new touch, new sound. Just to be clear, though: B’z still sounds like B’z.

As usual, B’z has released a message for their fans on the day of the album release:

Following the release of NEW LOVE, music magazine BARKS has published an extensive interview with B’z regarding the new album as well as the time leading up to the new album.

The interview reveals why Koshi has struggled with some shows during the 2019 HINOTORI tour. He has got asthma, which makes it hard for him to breathe — up to the point where it is difficult for him to sing at all. This put Koshi, who always strives for the best, in a very difficult situation. He started wondering what makes a good show. Is it a good show when fans go home having enjoyed the performance? No, Koshi says that he just simply wasn’t able to do what he wanted to do. And that had quite the mental effect on him until the end of the tour.

This tour also marks the end of an era. As previously announced, long time support members Shane Gaalaas, Barry Sparks, Yoshinobu Ohga and Takanobu Masuda were replaced with new faces. “We were thinking about making changes for quite some time now”, Tak Matsumoto says. They were thinking about advantages and disadvantages of making the changes, but ultimately the urge to set a new impulse won. “There wasn’t a problem with our support members, it was just part of the process”, Matsumoto adds.

With their new album NEW LOVE released, B’z will embark on a Japan-wide tour starting with a warm-up gig on June 4 entitled SHOWCASE 2019 -Makaitenshow-. The main leg of the tour kicks off on June 8 at the Kagoshima Arena. Koshi Inaba and Tak Matsumoto are looking forward to bringing a new groove to the stage with their new supporting band members.

Next month B’z will release their long-awaited twenty-first studio album with the title NEW LOVE. Billed as the next era for the band, the album sees new support members from the upcoming B’z LIVE-GYM 2019 shows and other guests joining recording for the first time. Notably, Robert Deleo of Stone Temple Pilots returns on bass after first aiding on three songs in 2007 while Joe Perry of Aerosmith is to be featured on album song “Rain & Dream”.

The thirteen track album includes four tie-in tracks that began airing from late last year. “Tsuwamono, Hashiru” can be heard in a Rugby World Cup ad, “WOLF” is featured in the Japanese remake of drama SUITS (in both its original rock form and a ballad version), “Deus” in the Suzuki Escudo commercial and “Majestic” continues to be used in a series of Pocky promotional vignettes. A music video for “My New Love” or possibly other album songs should be expected, by precedent, within the next few weeks. 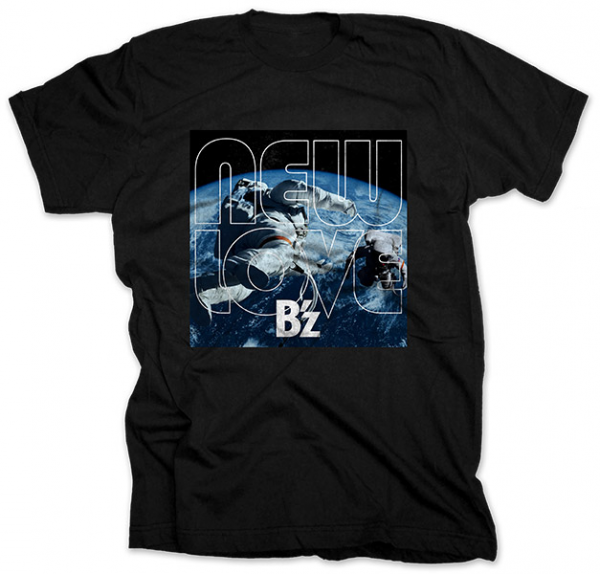 Most major retailers will have specific promotional items tied to pre-orders. The standard CD edition for 3,200 yen is joined by a T-shirt bundled version for 3,900 yen and comes in a Japanese medium size. The vinyl version is 5,000 yen. Both Amazon Japan and CDJapan ship internationally (Amazon shipping is cheaper & CDJapan can be release-day delivery).

B’z have announced the details for their upcoming 2019 LIVE-GYM tour that will support their 2019 Studio Album. Because the album has not been fully announced, the title for the tour isn’t available either.

The tour will also mark the departures of the band’s longtime support members: Shane Gaalaas on Drums (with the band since 2002), Barry Sparks on Bass (with B’z from 2003, 2008-2018), Takanobu Masuda (1992-1997 & 1999-2018) on Keyboards, and Yoshinobu Ohga (2011-2018) on 2nd Guitar. The decision was made by the band in order to try a new sound for their 31st year. Fans on social media have been overwhelmingly supportive of the outgoing members with many hoping to see them with the band again in the near future.

In their places will be all-new support members who have not performed with the band before though some have worked with Tak and Koshi in various capacities in the studio:

Mohini Dey (Bass) : 21-year-old Indian internet sensation who has been endorsed by Steve Vai. This is her first participation with B’z or Tak/Koshi solo activity.

Yukihide “YT” Takiyama (2nd Guitar) : Contributed arrangement and recording to all but one song on DINOSAUR and some backing vocals.