With the release of Koshi Inaba & Stevie Salas’s collaborative album CHUBBY GROOVE due out this week, the last of the promotional push is now getting underway. Foremost, the pair’s song “OVERDRIVE” is now serving as the theme to the new edition of Porsche’s Panamera as shown in the clip below:

Additionally, the duo have also made available a brief behind the scenes video with their song “WABISABI” as well:

A full video for one of the new Koshi Inaba & Stevie Salas collaborations has now been made available on the pair’s YouTube channel. The song “AISHI-AISARE” (Love, Be Loved) is set to be included on their album CHUBBY GROOVE, due for release on January 18, 2016. You can pre-order the album at the usual places: [YesAsia] [CDJapan] [Amazon Japan]. Their joint tour CHUBBY GROOVE TOUR 2017 kicks off January 25 and runs through a showing in Nagoya on February 20.

Additionally, another short music video for fellow album song 「Kunou no Hate no Sore mo Kotae no Hitotsu」 (What Lies At the End of Sorrow Is Also An Answer) has been uploaded and can be streamed below as well:

Koshi Inaba’s and Stevie Salas’ song “AISHI-AISARE” from their upcoming collaborative album CHUBBY GROOVE is featured in the latest NTT DoCoMo-owned streaming service d hits commercials. The full version of the song is also exclusively available for streaming on d hits from today.

Pay-TV channel WOWOW is teasing the upcoming special conversation between Koshi Inaba and Japanese tennis player Kei Nishikori, to be aired on December 31 on the very same channel. “TROPHY” from INABA/SALAS upcoming album CHUBBY GROOVE plays in the background, as it serves as the theme song to WOWOW’s 2017 series of tennis broadcasts. A short music video has also been uploaded to CHUBBY GROOVE’s official YouTube channel. You can check both out below! 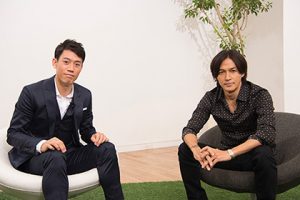 e track 「TROPHY」 off Koshi Inaba’s and Stevie Salas’ upcoming collaborative album 「CHUBBY GROOVE」 will be used by Japanese TV channel WOWOW as image song for their broadcasts of the 2017 tennis season, starting with the Brisbane International held from January 1 – 8, 2017.

What’s more, Koshi Inaba sat down with Japanese tennis superstar Kei Nishikori for a special “tennis conversation”. The conversation is going to be aired on WOWOW on December 31st from 4PM Japanese Time. A director’s cut edition of the conversation will be posted to Koshi Inaba’s official website en-zine on January 1.

Koshi Inaba and Stevie Salas will be guests at the public recording of the J-WAVE program 「SAPPORO BEER OTOAJITO」 in celebration of its 401th rendition. Fans can apply via J-WAVE’s website for a chance to be part of the audience. 300 winners will be chosen at random.

「SAPPORO BEER OTOAJITO」 is a weekly music program hosted by radio personality Chris Peppler every Saturday at 6PM. It’s unclear when the recording will be broadcast on the radio, but one can assume it’ll be on the Saturday following the recording date. Therefore, it should be December 17th.